Every eye in Parker was on NBC to see “our girl” Nastia Liukin compete for the Gold at the 2008 Beijing Olympics this summer. And she didn’t disappoint us! For those few days in August, we all got to live vicariously through her, watching with baited breath, and cheering her on with voices that we hoped she would hear halfway around the world. Nastia’s grace under pressure helped give the American team the Silver, and then she was on to the individual finals. When she was robbed of the gold on the uneven bars, we were all as dumbfounded as she, and as frustrated as her dad, Valeri was. 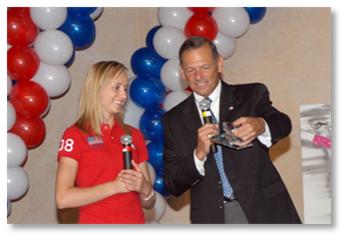 And after all that, she took home five medals the most important one in the games, the best all-around women’s gymnast. That’s about as good as it gets! After a week’s delay from a rain that would make Noah proud, the City of Parker honored our very own Olympic Champion with a Welcome Home Parade on Saturday, August 30, 2008.