Parker's own Jason Cotton is Ranked #162

He was ranked #162 among North American Skater Rankings when the NHL Central Scouting Final Rankings came out back in April 2014. He is committed to Northeastern University in Boston which plays in Hockey East up in the New England States, which is the same conference with teams like Boston College, Boston University and the University of New Hampshire. 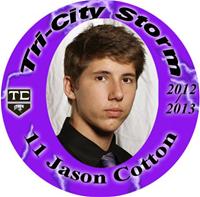 He also has a younger brother named David who was with Cushing Academy in the New England Prep School Athletic Conference and also has a NCAA Commitment to Boston College that is scheduled to begin in 2016. He's also eligible for next year's NHL Draft where he's starting to get some attention from NHL Scouts as well.