Parker Historic 2012 - "An Adventure in Parker's Heritage" preserving valuable memories that have passed from generation to generation.

The purpose of the Parker Historical Society is to bring together interested individuals and document experiences related to the development of Parker Community from the early days to the present.  Our goal is to preserve the valuable memories that have passed from generation to generation. oneer settler, C.A. McMillen established the Corinth Society August 2, 1846. Thought to be the oldest continuing church congregation in Collin County, its charter members included the Murphy, Wilkins, and Maxwell families. The church served as both a Presbyterian and a community church. The congregation first met east of Murphy in the Maxwell schoolhouse.

After the Civil War, the church members met in the McMillen home, and later at the Wilkins schoolhouse. Several years later, the congregation constructed its first church building at the corner of Grey Lane and Gregory Lane. In the early 1920's, Mr. and Mrs. C. C. Gregory donated more than two acres on Parker Road to the church. 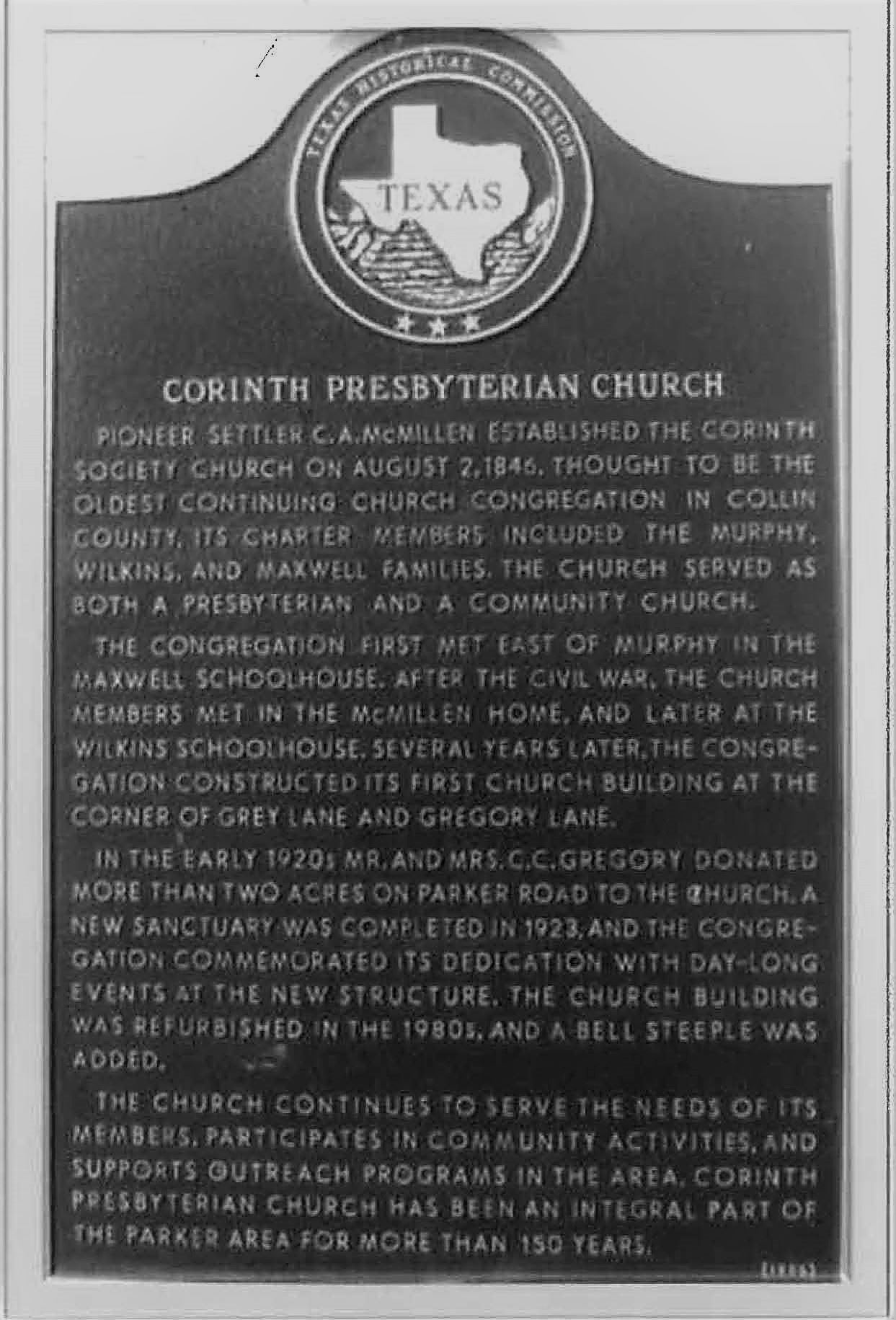 A new sanctuary was completed in 1923, and the congregation commemorated its dedication with day-long events at the new structure.

The church building was refurbished in the 1980's, and a bell steeple was added. The church continues to serve the needs of its members, participants in community activities, and supports outreach programs. Corinth Presbyterian Church has been an integral part of the Parker area for more than 165 years.

The Parker Community Class began meeting at Corinth Presbyterian Church in the 1920's. The 1929 New Year's Party called for girls to wear gingham dresses and the boys to wear overalls. Attendance was recorded including whether member had studied their lessons and could recite the "golden text". 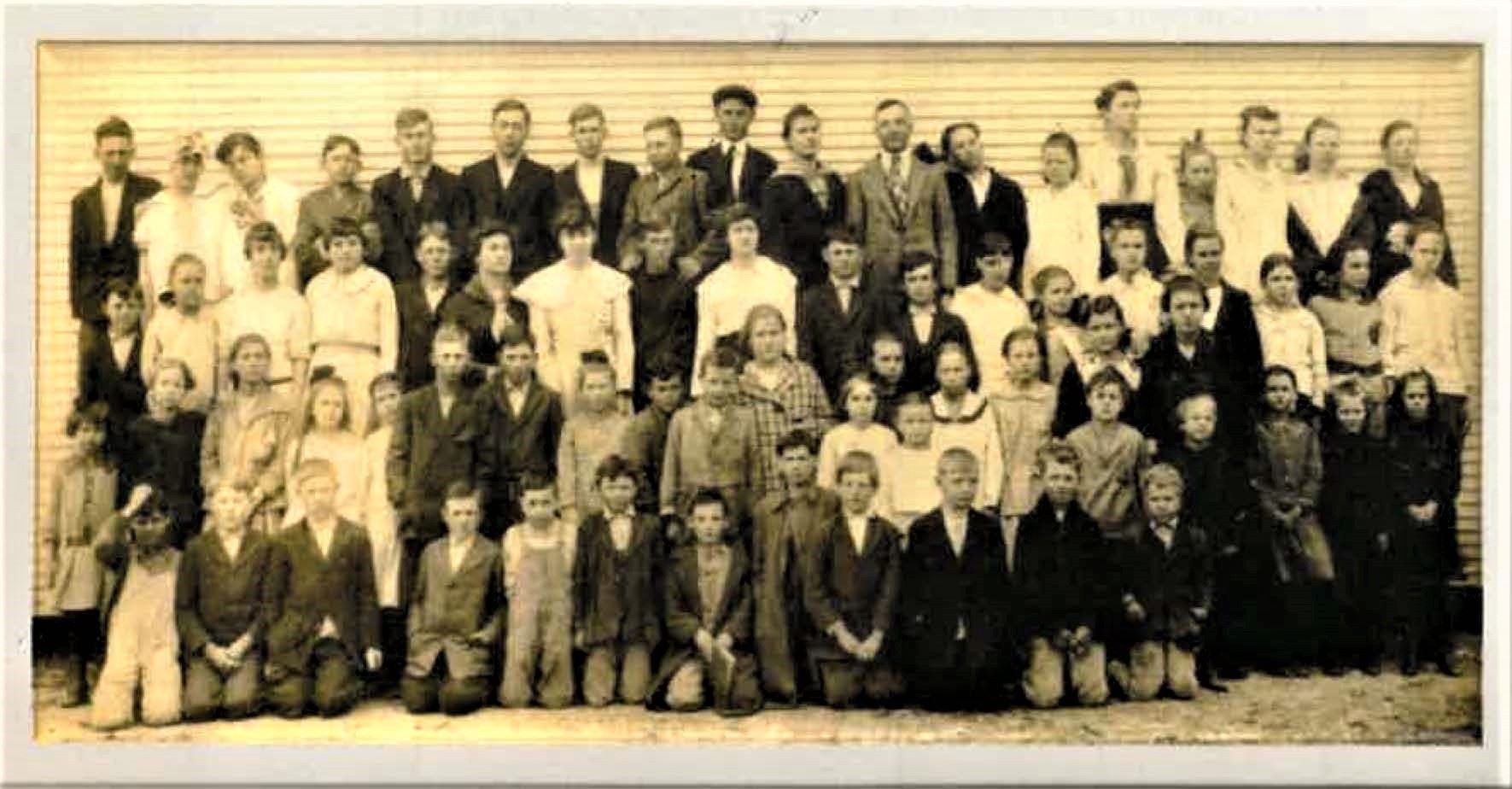 The first school in the Parker Community was in the home of Comfort McMillen, founder of Corinth Church in 1846. As families grew and numbers of children increased, there was a need for another school.

James Francis Stinson and his wife, Margaret Catherine, wanted a school nearby for their children and donated the land for a school, known as "Who'd a thought it" School, which opened in 1880. This name came from the exclamation of a man traveling by the school while it was under construction. It was located west of Bois d'Arc, south of Parker Road.

As the area continued to prosper, a four-room school for 90 students was built on Parker Road, in front of where Billy Myrick's house stands today. According to long-time resident, Arthur Hogge, the longest lasting schoolmaster laid his gun on the desk to maintain order in the classroom. The old well stands as a marker there. Over time, Parker's children were divided into different school districts, some to Plano and some to Wylie. Finally in 1948, the Parker School was sold and torn down with most students transferring to Plano.

On August 19, 1995, (47 years after the closing of the Parker School), former students and residents gathered at the Lucas Community Center. In attendance were 130 people (representing all but 3 families), 74 of which were students at the school. Many of the former classmates and neighbors had not seen each other for as long as 50 years. 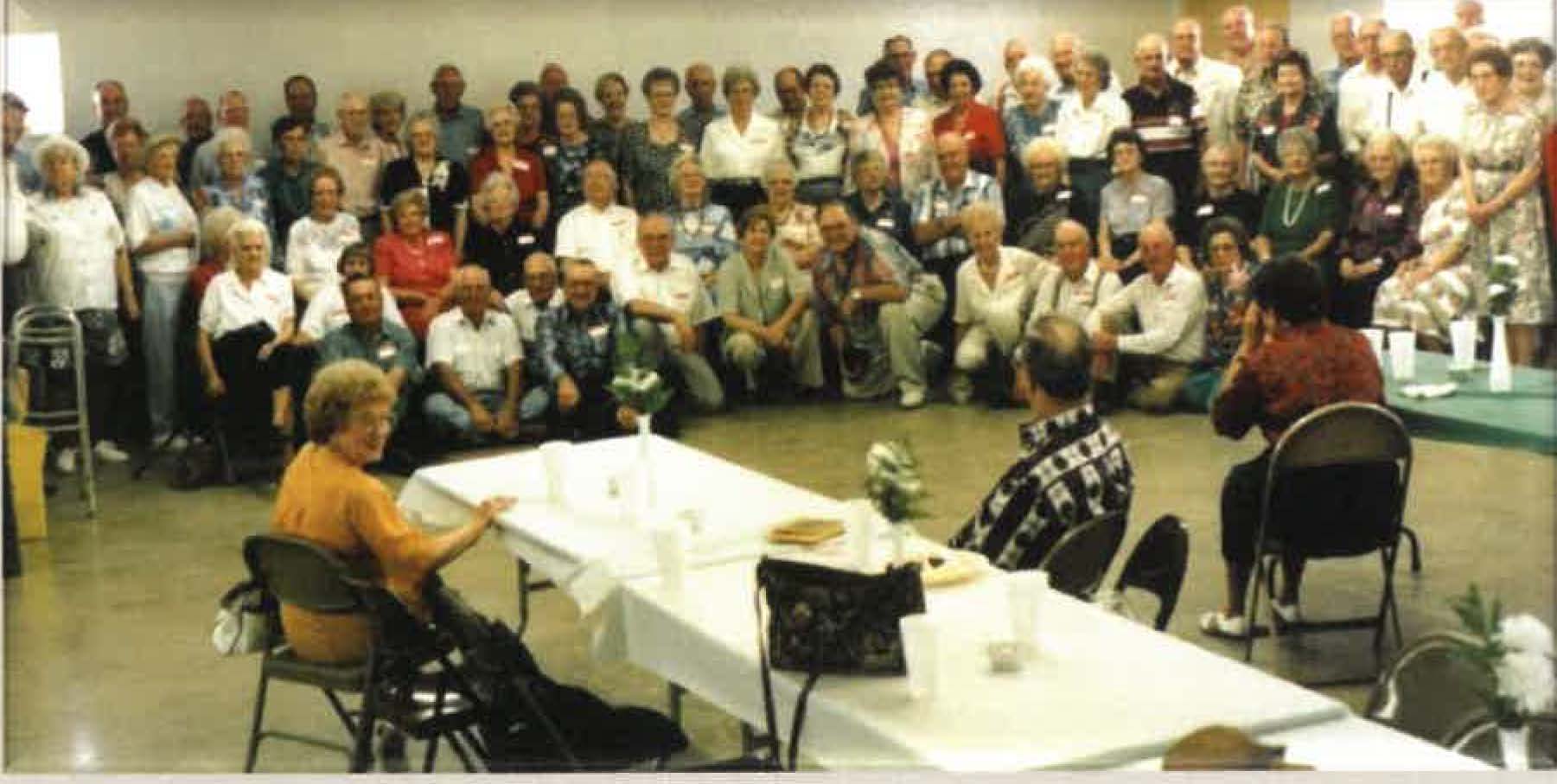 Over 160 years ago, the area that is now Parker was covered with prairie grass; grass so high and thick that the first settler had to burn their fields two years straight to prepare the land for farming. Some of the families that came here to farm and raise their children were the Dillehays, Gregorys, Hogges, Stinsons, Halls, McCrearys and Parkers.

John C. Parker was the first known settler. Our community was named for his son, William C. Parker who moved from Humphries County, Tennessee in 1855 and fought in the Civil War. Known as "Uncle Bill", he owned a gristmill that was operated by oxen and also had a cotton gin operated operated first by mule power and later by a steam engine fueled by cord wood and coal.

The City of Parker was predated by the Community of Parker located in an area around Maxwell Creek. At that time, Maxwell Creek was much larger with water supplied by the surrounding grasslands and scattered mini-forests. There was significant water flowing down the creek to supply power for a gristmill that supplied flour and cornmeal from the grain raised there.

The Corinth Presbyterian Church was established on August 2, 1846. In the 1880's, T.L. Johnson ran a gristmill and a general store. About this time the St. Louis and Southwestern Railroads planned a route through Parker, and town lots were laid out. Subsequently, the railroads decided to lay tracks further south of Parker, and with this, Parker's prospective business boom faded.

In November 30, 1900, Parker's one and only post office, opened April 12, 1888, was closed. One store and a population of 50 were reported in 1910. By 1940, Parker had three businesses and a population of 86. It was during the 1940's that the schoolhouse was sold and torn down and the Parker children were divided into different school districts.

The City of Parker's first attempt at incorporation was in 1968. In 1969, the problems from the previous incorporation were corrected and the City was formed in a much smaller version of today's city. The original city concept was to have a city which would be somewhat similar to what existed in North and East. Richardson as well as in East Plano in mid-1967 (relatively large plots of land with homes built to individual tastes).

Parker was incorporated as a city on March 22, 1969. At the time of incorporation all of the west part of Parker was in Plano's extra-territorial jurisdiction. Our Mayor and City Council were successful in having Plano relinquish its claim.

Within a short period of time, it became evident that Parker would follow Plano's intense development. In order to change this course, a small group of citizens was formed to steer a different course. The Parker Concept was developed and fortunately implemented by the newly elected officials in the third year of the City. The large lot came into being.

In the beginning, a majority of the land mass that now comprises Parker was county land over which the City had very limited control. At the time of incorporation, there were three sub-divisions in existence: (1) Cottonwood North and South (two acre lots) and Easy Acres (one acre lots). The first development annexed into the city with lots of five acres was at the northeast corner of Pecan Orchard and Springhill Estates Drive. Over the next ten years, with changes in elected officials and developer pressure, the interpretation of the ordinances changed to reduce new lot sizes to one acre and less. About 1990, citizen pressure resulted in a partial return to the original concept. A majority of the Councils since have adhered to this. During this and up to the present time, the City Government has been people friendly and willing to listen to its citizens. 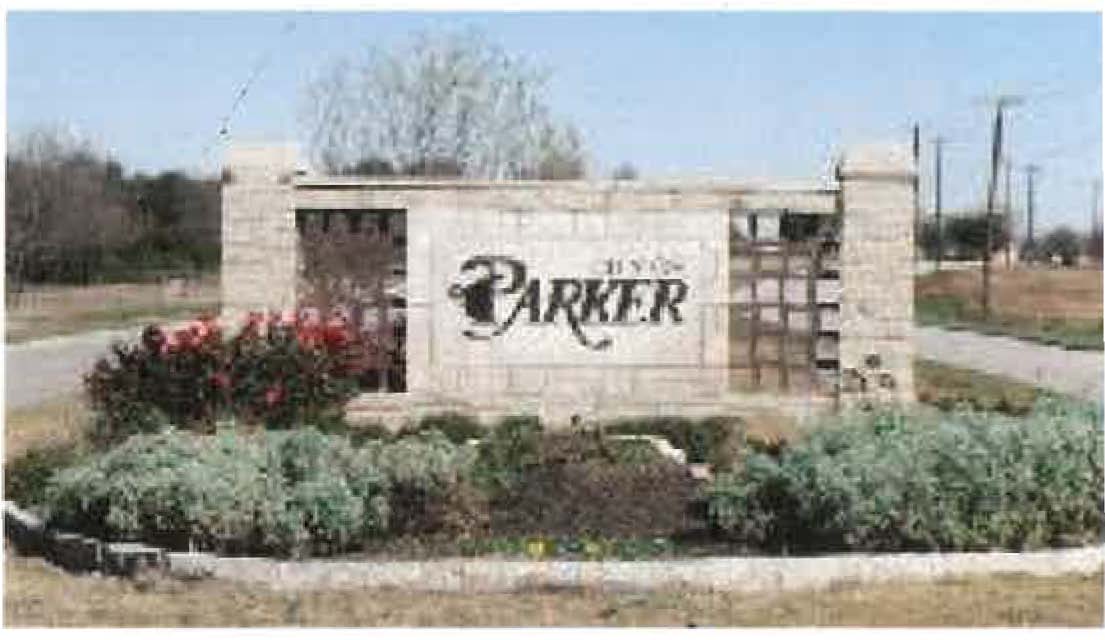 Volunteering was a function which saw its start among its citizens even before the creation of the City. Parker was accessed from all points via farm to market roads. These were not highly improved. Even Parker Road, which was the best, consisted of a narrow winding practically, no shoulder one.

Most of the roads within Parker were white stone with plenty of dust. Some of the early asphalt was poorly laid and potholes had to be filled. This was a function, performed in the absence of a street department by volunteers with their trucks, shovels and old shoes which were discarded after use.

In summer 2005, the Parker Women's Club raised money for the Parker Road Beautification Project. From this effort, a donor recognition plaque was placed at City Hall, erection by the city of a monument at the west entrance to the city on Park Road (Betsy Lane) and landscape of the Parker Road Median. 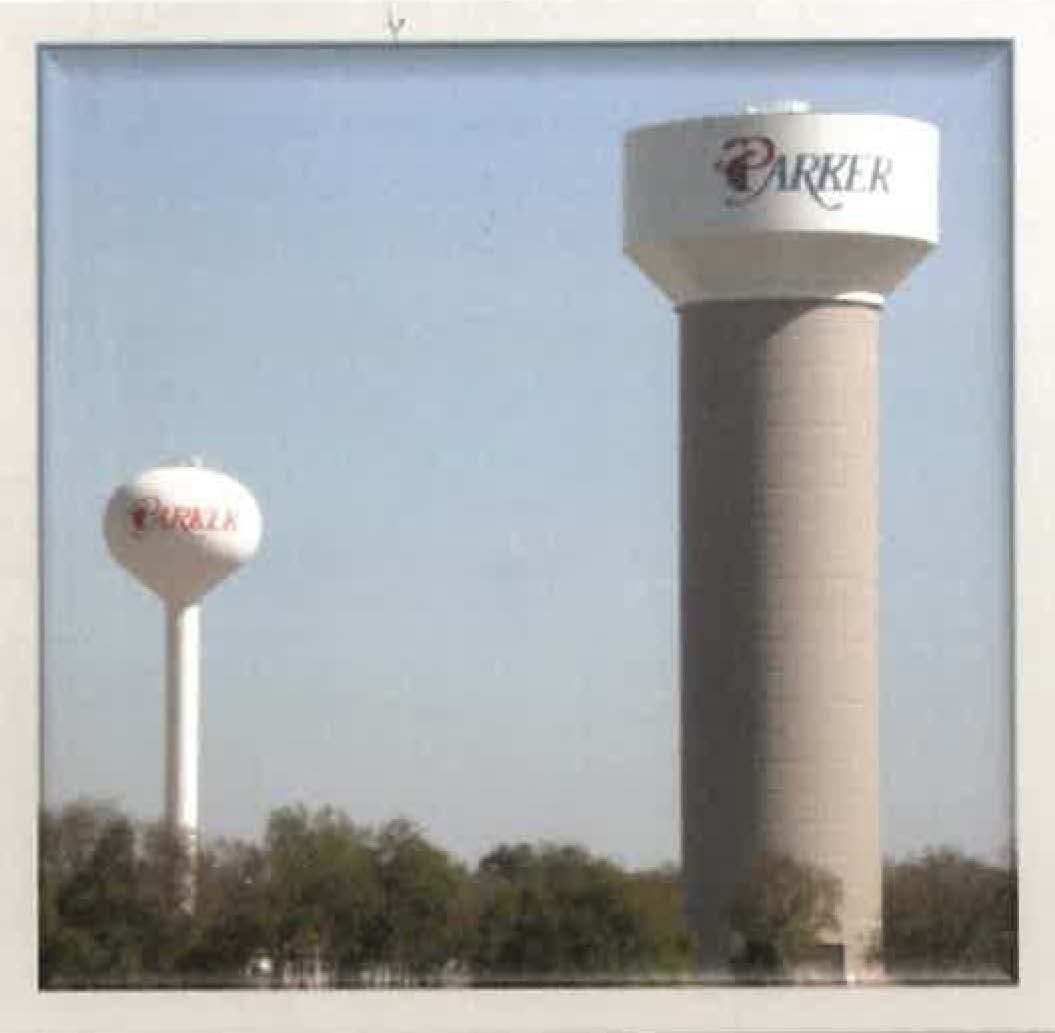 In 1964, a rural water non-profit corporation was conceived by the community of Parker, to become the Pecan Water Orchard Water Corporation. The system was installed and started serving 150 customers in December 1966. By December 2010, a new million gallon Water Tower had been installed by the City of Parker. 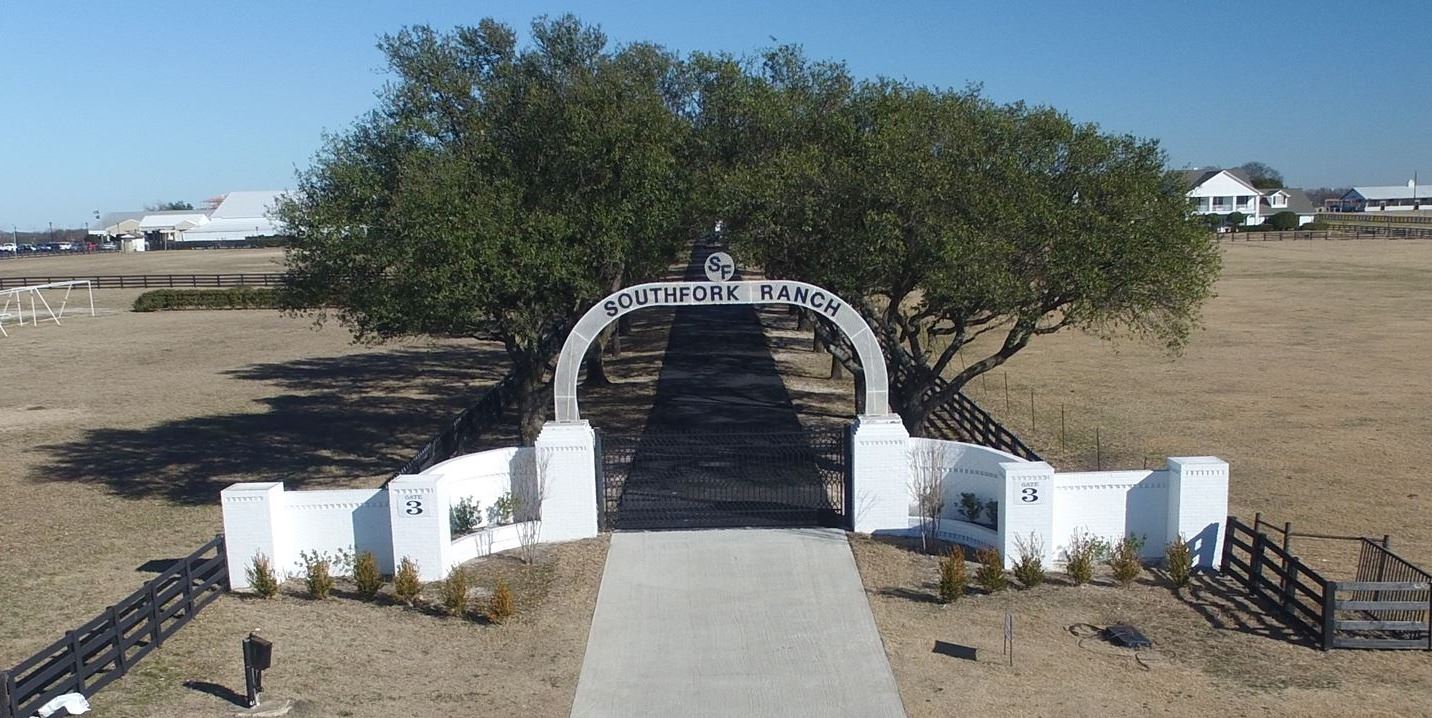 In 1978, a legend was created that would virtually be unmatched by any other series in television history. It would go on to take the world by storm, accumulating millions of fans along the way and propelling an unknown Texas ranch into one recognized around the world. Viewers across the globe would await each twist in the series, knowing the television family as well as their own. The series was "Dallas," the family was the Ewings, and the ranch that was home to it all was Southfork. The TV series' exteriors were shot on the ranch beginning with the second season (1978-1979) of Dallas, and shot there until 1989 when the series' production shifted entirely to California. Dallas returns to TV and the North Texas area beginning in summer 2012.

The house was built in 1970 by Joe Duncan and was know as Duncan Acres, named after his family. The property was originally 200 acres (0.81 km²) in size. The ranch is currently an event and conference center, owned by Forever Res

orts. Daily tours of the Ranch and Ewing Mansion are offered. It is home to the KLTY-FM radio Christian concert Celebrate Freedom, held annually during the Independence Day celebration, and to the July 4, 2009, "America's Tea Party," which an organizer claimed drew an estimated crowd of 25, 000 to 35, 000 attendees. Southfork continues to draw tourists from around the world.