Rabbits gestate for only 30 days, and usually have litters of between 4 and 12 babies (kits), depending on the breed. Once the babies are born, the doe can mate and get pregnant again as soon as the following day.

Mothers feeds baby rabbits only twice a day—at dawn and dusk. Baby rabbits found alone in a nest are usually not orphans.

If a nest has been disturbed, put it back together and cover the babies with the grass that originally covered them. To check if the mother is coming to care for them, place several lengths of yarn (small branches work, too) in a grid pattern over the nest. If the grid is disturbed after the next dawn or dusk, the mother is still caring for the youngsters.

Baby rabbits leave the nest when they're 3 weeks old and about the size of a chipmunk. If you find a chipmunk-sized but fully-furred rabbit with eyes open, ears erect, and the ability to hop, they are meant to be on their own. As small and helpless as they may look, they are not an orphan and doesn't need your help.

You can prevent harm to baby rabbits by checking your yard carefully for rabbit nests before you mow. Do this especially if you've let the grass get taller than usual.

Outdoor cats and dogs are a major threat to bunnies. If your pet gets hold of a bunny, a licensed wildlife rehabilitator or veterinarian should see the bunny immediately. And bring the pet indoors immediately. A dog or cat will remember where the nest is and put the other bunnies at risk.

Also, unfortunately, it's not uncommon for people to abandon pet rabbits outdoors, and domestic rabbits do need our help. Domestic rabbits look a bit different from wild rabbits. Most wild rabbits in The United States are cottontails, who are brown with white tails. Domestic rabbits vary in size from 2 lbs. to over 20 lbs. (though most will be around 5 lbs.). They have ears that stand up, hang down, or are stuck in the middle. And, most notably, their coats come in a wide variety of colors and patterns, from pure albino white to jet black, with plenty of browns and grays in between; their patterns may be striped, spotted, or more unusual.

There are several species of wild rabbits—most are called cottontail rabbits—who, between them, live across most of North America. Cottontails like to live at the edges of open areas. In fact, they are rarely found in dense forests or open grassland.

This love of edges means they love our suburbs. Yards, parks, playgrounds, and office parks, often with small natural buffers in between, have lots of edges between small areas of different habitats that rabbits love.

Here today, gone tomorrow is one way to describe rabbits in suburbia. Given the many predators who make meals of rabbits, their populations can rise and fall dramatically over the course of a year. Sometimes, by doing nothing and letting nature take its own course, the homeowner sees the same result as they might from trying to "control" rabbits.

First things first: Make sure a rabbit is the culprit. You may see the rabbits themselves most often near dawn and dusk.

Barriers for flowers and vegetables—A well-constructed fence  is the most effective way to protect plants. Two-foot high chicken wire supported by posts every six to eight feet is strong enough to keep rabbits out. Stake the bottom securely to the ground to prevent rabbits from pushing underneath it.

Movable fence panels can protect the garden right after the first planting, when damage is likely to be most severe, and go in the shed the rest of the year. Some years, you won't need the panels at all, given the ups and downs of rabbit populations. New plantings can be protected individually under plastic jugs that have the bottom cut out. These also serve as mini-greenhouses in spring when nights are still cool. Other protection may need to be provided once the jugs come off.

Barriers for trees—Commercial tree wrap or plastic tree guards can keep rabbits from nibbling bark. Cylinders of hardware cloth (stand on their own) or poultry wire (need staking) can work as well. These barriers should be as high as usual snow depth plus eighteen inches. Young trees and saplings are more vulnerable so focus on protecting them.

Rabbits may reach low-hanging branches. A homemade barrier can encircle around them as well. Or prune and leave the trimmings on the ground away from valued trees as a decoy food. Rabbits prefer twigs and buds to the bark of the trunk and will eat these instead if they are easy to reach.

Repellents—In some places, fencing won't be practical or damage will be so slight that a fence isn't cost effective. Then chemical repellents can protect small plots and individual plants. Don't use a repellent on plants that people will eat unless the label specifies it is safe to do so.

Scare Devices—Sometimes, scare tape or balloons might frighten rabbits away from an area. The pinwheels sold to repel moles might provide a look scary to rabbits as well.

Habitat Modification—Remove cover (vine thickets, tall grass, and shrub cover) around gardens and orchards so rabbits don't have escape cover. They will spend less time—and eat less food—where they feel unsafe. Think, however, about the potential negative effects on other species that could benefit from a naturalized back yard.

Rabbits can be infected with tularemia, which may be transmitted to people if they eat undercooked, infected meat or handle a sick animal. It's best not to handle any wild animal, if at all possible. Wear gloves if you must handle a wild rabbit. And wash thoroughly afterwards. 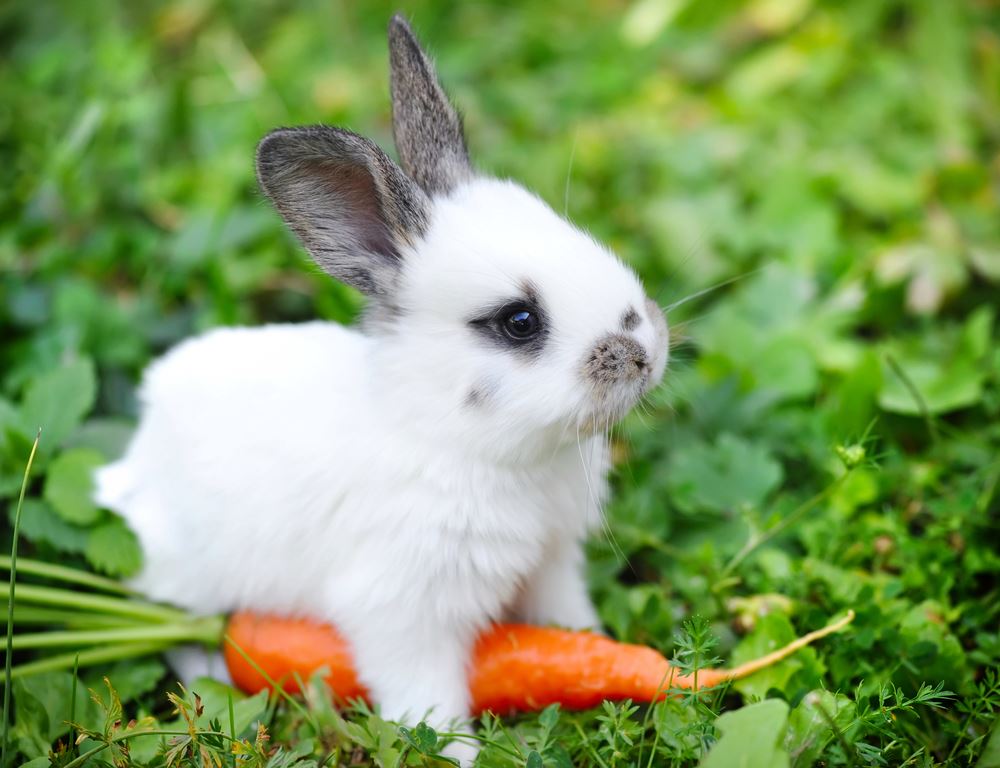